Today’s entry comes from All Day SCI Fi. If you would like to make a contribution, please email it to me at godardsletterboxes@gmail.com 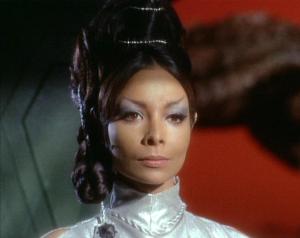 Is T’Pring the ultimate Dragonlady of science fiction?

To what extent is television a mirror of the culture and can tell us things about ourselves?  A very curious thing about Star Trek was that the first pilot was rejected and the character, Number One, played by Majel Barrett was rejected and she became the wimpy nurse Chapel.  It was the 60s and the Enterprise crew women ran around in mini-skirts.

But have sci-fi women had to become MACHO to attain equality with men?  Is that what has been actually happening in our society?  So we got Ripley and Starbuck.  But does macho tend to be somewhat dumb in the real world if not in sci-fi?

The Amok Time episode gave us a very different woman, but of course she was an alien.  She comes into the picture because of Spock, her husband, who hasn’t mentioned her existence  suddenly cannot literally live without her.  Spock has been running around the galaxy with some human and the human was in charge.  It looks like more 60s culture with Tonto following the Lone Ranger and Kato kowtowing to the Green Hornet.

T’Pring is supposed to have been a good little Vulcan wife calmly waiting for her husband to return but apparently she has not been following the script.  Or at least Theodore Sturgeon, a highly respected science fiction author, came up with a whole new script.  T’Pring has decided that Spock needs to be dumped out of the nearest airlock.  Everything is finally explained in the dialog near the end.

What a FEMALE being flawlessly logical!?  Oh, she’s a Vulcan.  That’s OK then.  LOL

But then and now T’Pring is usually regarded as a B-T-H by most Trekkies.  She was supposed to put up with the ridiculous situation of being left alone on Vulcan year after year with the HONOR of being the consort of a Legend that was never home.  She is in the wrong for wanting more purpose in her life than waiting on someone that was never coming.

Dragonladies don’t take that crap.  By bringing Kirk Spock gave her the opporunity to put herself in a win-win situation with no risk to her paramour who couldn’t figure it out.  And the dummy Kirk fell right into the trap.  Of course Spock might have gotten killed fighting Stonn.

A very thought provoking episode once looked at beyond the superficial.  A true Lady without being Macho.  A manipulator of the Macho.