Yes, it is noisy, yes the Australian accents are (predictably) terrible and yes it massively fails the Bechdel test with only one woman character who even really talks. But it is such fun, as well as being intelligent and that one woman character is an excellent one – non-white, smart, strong and capable. It knows its audience and it caters to them extremely effective with well staged giant scale fights and clever touches (and a Star Wars reference in the first ten minutes will always guarantee my attention). It actually had some quite strong performances from quality actors like Idris Elba and Charlie Hunnam, even if I couldn’t help giggling at Stacker Pentecost’s inspirational speech (and you have to love the name). I also thought that it had moments of great beauty – in particular Mako’s memories are beautifully shot and composed with really effective use of colour and constrast. Hard to beat though for its giant machine on giant alien monster action though. 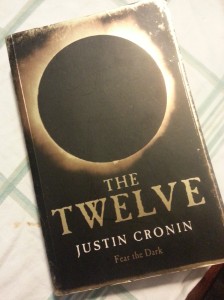 Like The Passage the first half of The Twelve is significantly better than the second, with compelling portraits of characters and strong ideas. I particularly enjoyed the return of Lawrence Grey and the beautifully painted portrait of life in the immediate aftermath of the outbreak. While the second half was not without merit, there was a level of caricature which was jarring, particularly against the very serious and emotionally compelling depictions of a number of the characters, particularly the ones we had previously met in The Passage. The critques of torture and propaganda were transparent and didn’t really go further than a very crude “these are stupid and ineffective and counterproductive” although I was interested in the use of suicide bombing as a trope. For me, the character of Horace Guilder in the second half of the book did not seem well-formed – someone with his experience and knowledge would surely have been more sensible and sophisticated, and the reasons he wasn’t were not explained. Still worth it, but hoping that the intimated final novel will be a bit tighter and more like The Passage. 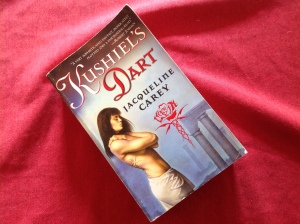 I found this book extremely readable, despite some doubts about some of the choices around setting and religious notions. The world of the novel has deliberate references to our own world and religious mythology but the purpose of this referentialism is not particularly clear. Despite this, the characters are engaging and the story is emotionally compelling, even if soem of the politics of the world is overly complicated and not actually that interesting. In the end, the most interesting part is the story of Phedre and her discovering of herself and her capabilities. It also comes with a fair dose of reasonably well written BDSM eroticism as Phedre’s  position as an anguisette means that she gains genuine pleasure in pain. Despite my intitial doubts, I enjoyed the ride and am looking forward to reading the second novel.

Django is very clearly a Tarantino film with its clever dialogue followed by ultraviolence, but it also captures and reflects Taratino’s love and knowledge of film with its fabulous pastiching of the spaghetti Western and blaxploitation genres. The open titles with set that tone which is followed through in many of the details including the spectacular use of music. Dr King Schultz is a fantastic character, and ther performances are strong – Samuel L Jackson is almost unrecognisable. I feel that critiques that pose the film as one of white-rescue-of-black man are unfair – Django clearly has agency and it is he who rescues himself. My only concern in the racial politics is the idea that Django is “that one man in 10 000”, which ignores the strutural, social reasons for the answer to Candie’s question “why don’t they just kill us?” But the film’s political edge does extend to a kind of revealing that behind the privilege and the fancy-ness of existence lies great exploitation, and that the greater the fancy, the greater the exploitation.

So Sherlock is good: well written, extremely well directed, clever and entertaining. But that doesn’t mean it is without fault. The gender politics are abysmal: not only are the women almost exclusively minor or secondary characters, they are almost entirely foils or mistreated beyond all measure. And sadly I think Steven Moffatt has taken Sherlock into a very (recent) Doctor Who-ian space – with the bad guy so uber-powerful and the need for Sherlock’s response to be so extreme, that you wonder how the next series can be anything but anti-climatic. However, one can hope. But sometimes one wishes one had seen how he had solved all the mysteries that get referred to in passing! 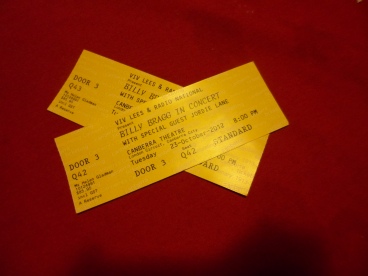 With just Billy Bragg and a guitar on stage,  he probably talked more than played, but that was totally OK as he is interesting and passionate and thoughtful and still idealistic. The first half of the show he played Mermaid Avenue songs and talked about Woody Guthrie – his story about the Woody Guthrie festival he played was very entertaining (pays to know all the verses of This Land, apparently). In the second half it was standard Billy Bragg, including many favourites such as Levi Stubbs Tears and a reworked version of The Great Leap Forward. While I do perhaps suffer from cynicism about the union movement (and the actions of many unions in Australia of late have not helped this at all), There is Power in a Union is still a great song. And he kept my favourite to last, but there is no better way to finish that A New England. A funny crowd – largely over 40 and many still dressed in their public service upper middle management wear and the Canberra Theatre is not the best location – one would prefer to be standing somewhere clutching a beer – but not an event to miss. 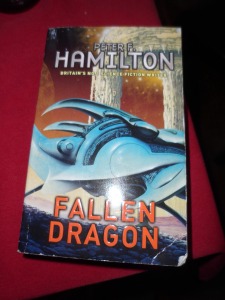 I bought this in an airport when I had run out of plane reading and knew that Peter Hamilton is pretty reliable for that kind of reading – hence the cover damage. It was an entertaining read, though I thought the first half was a bit slow in parts and probably would have benefitted from being rather tightened up. Like much of the Hamilton oeuvre, Dragon has a long build up to the relatively quick pay off, so it is fortunate that much of that build up contains interesting ideas. Again, as with the other Hamilton I have read, the exploration of the power and role of corporations and economics in setting limits on things like space travel and exploration are very interesting and, as with the Commonwealth setting books, it is corporations who wield all the power.  Characterisation is a little superficial at times and I think there were aspects of Lawrence’s character in particular which weren’t well articulated. Overall, excellent for reading on planes, especially in the second half, with interesting ideas, but ultimately not a book I would ever read a second time.

A new method of reviewing as I seem to find myself short of time….

A book about witchcraft and James I, Winterson naturally managed to weave issues of class and gender into it. In fact it is a story of power – of legal power and arbitary powers, of the power of love, of supernatural power and the power of belief.  It also strongly features the manipulation of power. The characters are beautifully drawn and the story is compelling reading, even though the outcome is clear. I thought the use of Shakespeare as a character seemed unnecessary and a little contrived, but that was one of the few narrative missteps.  Enjoyed very much the short but sad time it took to consume.