This month, we’ll dive right into it.

The Evolutionary Void Peter Hamilton This is the third book of a trilogy which I had been enjoying a lot, so it was with much excitement that I started it. Sadly, I don’t think it lived up to the other two. Perhaps it was that the Edeard parts which were so engaging in the previous two books, didn’t have quite the same magic. Or perhaps it was that the denouement lacked a bit of punch, with a number of major characters with very little to do. The massive imperative previously for some characters to do certain things (trying to avoid spoilers here) just sort of trickled away. Still enjoyable and still fun, but sadly not quite the finale for which I was hoping.

Peter Duck Arthur Ransome This is the first of the “adventure” Swallows and Amazon books with the children adventuring over the seas with Captain Flint and (as we know from Swallowdale) the imagined Peter Duck. Like the books which remain closer to home, Peter Duck is an engaging adventure with sly humour. Those adult of us reading may question the likelihood that a cyclone and earthquake would hit the island on the same night, but the small people readers are completely enthralled by it. Once again, easy-to-read, engaging fun which holds up well even 80 years after it was written.

Game of Thrones season 1 (second half) So, last month I did complain that a few of the early episodes of Game of Thrones were a little slow. In the second half of the season we get the pay off. The politics come together, characters come to the fore and the episodes are gripping and exciting. Things you are convinced won’t happen do, and you stay glued to the screen through all of it. It is interesting how characters who seemed more stereotyped early in the season seem to break their shackles somewhat and how the story does not always go where you expect it to. Of course, questions remain like are there too many boobs? but over all, I think that the Game of Thrones  manages the balance and makes itself something that we are all now waiting for expectantly – next season is going to be a thriller. Must resist the temptation to read the books…  Other useful links include this illustrated guide to houses and relationships and the Buddy Comedy take on the first season.

Rome season 1 There were some interesting things about Rome and it was enjoyable, but it was not outstanding television. I think it suffered from too few central characters, which made much of the action seem somewhat contrived – the final explanation of why Caesar managed to get himself killed in the Senate (apologies if that is a spoiler anyone) was so contorted and contrived as to provoke one to say “yeah, right.” I also didn’t like the fact that the two central female characters were both quite so unpleasant and it was very hard to sympathise with either of them. I did enjoy the character of Octavian though – some very clever moments there – and also Marc Antony was rather entertaining. I also thought the depiction of the relationship between Caesar and his slave which rather well done. Nonetheless, while I don’t believe that we should fetishise accuracy in historical drama, some of the compressing of events did make it feel like Caesar was in power for a very short time. Over all though, I did enjoy it enough to contemplate watching series 2.

The Art of the Brick Nathan Sawaya

On at Federation Square in Melbourne, this exhibition demonstrated what all good art should do – very strong technical skills but also imagination and inspiration. I think I was less impressed by some of the nonetheless highly impressive exhibits, like the large-sized Parthenon where the technical skill was mostly demonstrated, and more impressed by the ones like Mask which demonstrated a strong use of the medium to convey different ideas and emotions. A further up-side of the exhibition – it is something which small people will enjoy. It was also beautifully curated, with the white and black backgrounds allowing the colours of the Lego to shine. Well worth seeing, it goes beyond the nostalgia for those Lego Exhibitions I looked forward to every year as a child. 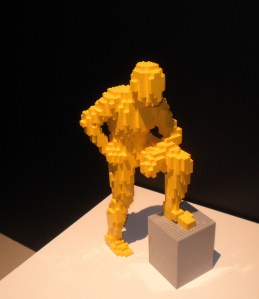